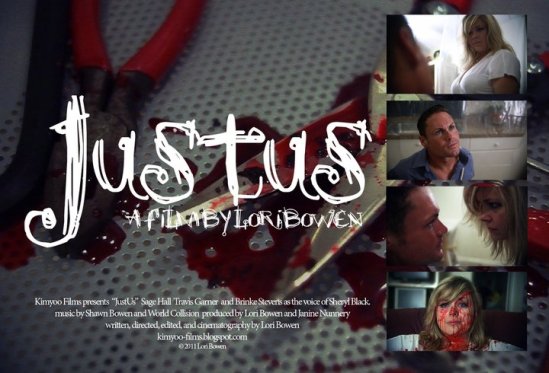 ‘JustUs’ is a fantastic short film by Lori Bowen, who has been featured on this blog before.

Starring Sage Hall Reinagle as Joanne and Travis Garner as Darren Green, the film follows a woman hellbent on vengeance after the man accused of raping and murdering twelve young women is let free due to a technicality.

It’s a dark premise that nearly all of us has pondered at least once in our life. If we had the chance to dole out our idea of justice on a heinous criminal, how would we do it? More honestly, would we be able to go through with our plan? What are the consequences of doing such a thing?

Mrs. Reinagle is an accomplished actress and director in her own right. She is captivating as Joanne- gorgeous, tormented and blood-thirsty.

Green, who is familiar with Sage and Lori from working on Reinagle’s The Couch, shines as the marked man who quickly realizes the court system was the least of his worries.

Horror veteran and highly regarded Woman In Horror Brinke Stevens adds a great supporting role to the film as the radio personality who sets the film in motion.  Kristin Mellian, who was the lead in Bowen’s directorial debut Without/Within, and Aaron Pushkar also lend their voices to the radio stations during Joanne’s drive home in the opening sequence.  Stevens’ voice earned her an award at Creative Loafing‘s Reel Terror Film Festival for Best Faux Radio Broadcast.

Shot on a budget of roughly $200, Bowen gets every penny’s worth and then some. This is a prime example of independent horror film making done at it’s finest. The technical aspects of the film are top notch. With the revenge factor kicked up in high gear during this six-minute film, it’s interesting to see what happens after Joanne exacts her vengeance. A perfectly ambiguous ending earns JustUs even higher marks.

I am a freelance writer, mostly of horror and everything macabre. As a die hard fan of the genre with a particularly deep affinity for Women In Horror, I write film reviews, short stories, screenplays and conduct as many interviews as I can with the fantastic people who make the horror genre my absolute favorite!
View all posts by Justin Hamelin →
This entry was posted in Florida horror, horror, horror films, independent filmmaking, Lori Bowen, review, Viscera Film Festival, Women In Horror. Bookmark the permalink.