A Karen Lam Double Feature: ‘The Meeting’ and ‘Stalled’ Reviewed!

What do your weekends usually consist of? Odds are, they aren’t nearly as productive or bloody as Karen Lam’s.

During the course of one weekend, Lam managed to put together two of the most entertaining shorts of the year thus far. Both starkly different in story, The Meeting and Stalled work wonderfully. They are tight, aesthetically pleasing films that combined come out just under twenty-five minutes.

Whether you prefer your horror to be grounded in real-life terror or swimming in dark comedy, Karen Lam has a treat for you…

Written, directed and produced by Lam, The Meeting is a charming horror comedy focused on just another regular SKA meeting. You’ve heard of AA and NA, but what about those in our society who should be having their meetings within the confines of a padded cell? Here, they share their thoughts and stories in the basement of a church, avoiding an ugly ending to their lives by spilling their guts (figuratively) about the people whom they’ve spilled the guts of (literally).

Each character is entirely different, from the stereotypical serial killer Lyall (aced by Charles Zuckermann) to the Ned Flanders-esque Joel (David Lewis). David (John Shaw) and Ogden (Linden Banks) round out the queasy quartet. All four have their moments of ghoulish comedy. Am I a bad person if I say I actually liked these characters in the film? I certainly hope not, because you should, too.

The shit really hits the fan when a new member joins the group, a widow by the name of Harriet. A beautiful woman offering cupcakes and the seemingly archetypical naive ways of your run of the mill slasher flick victim, Harriet can hold her own just fine in a room full of woman-loathing murderers. She’s as sweet as her cupcakes and in the end, it’s a recipe for disaster for the recovering killers.

The dark humor really excels here, thanks in no small part to fantastic acting and Lam’s delightfully twisted sense of humor. 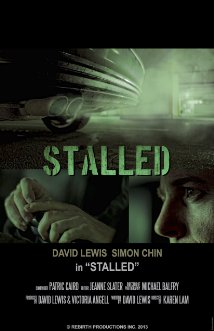 Written and produced by David Lewis (who also plays the lead role in the short) and directed by Lam, Stalled should get a lot of recognition from short film festivals throughout this summer.

Lewis proves he is just as good a writer and behind the camera as he is an actor, starring as a man who is struggling to cope with the fact that his life is turning upside down and there’s little he can do about it.  After an emotionally draining phone call to his soon-to-be ex-wife loses signal in a parking garage, Lewis heads back to his car to do God knows what. Only there is a man trying to jimmy the lock of Lewis’ car and it’s easy to root for the down-on-his-luck lead to take some frustration out on a thief.

The film brings up a problem we all face from one time or another- when is it OK to stand up for ourselves and how far is too far?

As with every Lam film, the technical aspects and production value of this short are top notch. The dark parking garage adds an extra layer of melancholy atmosphere that allows the viewer to be in Lewis’ character’s world.

Simon Chin as the suspected criminal is an imposing figure, thus making it quite easy to root for Lewis when a physical altercation begins.

With a stunning climax that will leave your jaw hanging, Stalled is a helluva way for Lam to have spent a weekend.

I am a freelance writer, mostly of horror and everything macabre. As a die hard fan of the genre with a particularly deep affinity for Women In Horror, I write film reviews, short stories, screenplays and conduct as many interviews as I can with the fantastic people who make the horror genre my absolute favorite!
View all posts by Justin Hamelin →
This entry was posted in Uncategorized. Bookmark the permalink.