‘They Will Outlive Us All’: A Mangled Matters Review. 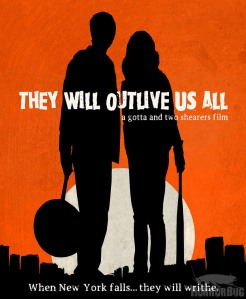 If you are any part of the independent horror scene, you most definitely must know the name Jessi Gotta.  First, it was the awesomely hairy splatter-fest THE BIG BAD and then it was the dark and jumpy zombie love-fest ANNIVERSARY DINNER. Now, be prepared for one of the best horror comedies available today.

THEY WILL OUTLIVE US ALL has it all- bugs, blood, laughs, slime, ass kicking and a tandem of main characters whom you can’t help but relate to and love.

Gotta and Nat Cassidy play Margot and Daniel, respectively- roommates who spend most of their free time watching horror films and drinking or smoking away the stress of another day of work.  They live in a run-down apartment complex in New York City.  The year is 2016 and the eastern seaboard has been battered by round after round of “Frankenstorms” in the wake of Hurricane Sandy.

When neighbors start dying mysteriously and an odd ooze is found under doorways and in the building’s basement, it doesn’t take long for Margot and Daniel to realize things are about to get weird.  And boy, does it get weird!

Soon enough, a bug straight out of a 1950’s atomic horror flick is darting around the dark apartment, moments reminiscent of DREAMCATCHER (always close the toilet lid!) make you cringe and some good old fashioned viscera makes the final act of the film just as delightfully crazy as the first two stanzas. 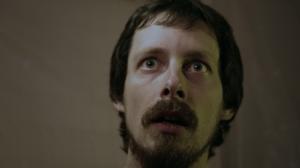 Nat Cassidy realizes if the bathroom door is a’knockin’, don’t open it.

One thing that always makes me nervous about low-budget comedy films is the dialogue.  The jokes can come off as forced and the witty commentary often seems too long-winded or too researched by the film’s writing team.  Not so with good ol’ THEY WILL OUTLIVE US ALL!  The chemistry between Cassidy and Gotta is strong, making them very likeable characters.  Their banter amongst one another on everything from hogging the shower to figuring out how to kill a big (and I mean freakishly big) bug scuttling around their apartment is loose and smart.  I guarantee you won’t find another film this side of the sun that makes better use of the word “cunt”.

It’s hard enough making an indie comedy funny, but this film does more than that- it mixes in the heebie jeebies of bugs and gross slime and also the darkness of impending doom with ease.

As with all of Gotta’s projects, the behind-the-scenes crew is just as top notch as the people in front of the camera- and some of them manage to do both!  Alyssa Simon, Jane Rose, Patrick Shearer and Stephanie Cox-Williams all return to help on this project after making ANNIVERSARY DINNER such a success. 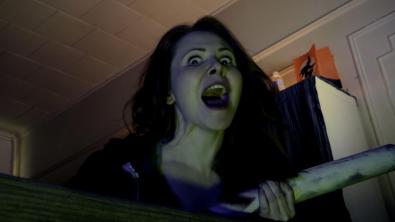 The camera work is fantastic, only topped by the incredible use of lighting throughout the film.  Whether in the protagonists’ apartment or running down the desolate hallway, the lighting sets the mood for every scene and once things start to get messy, the use of blues and greens really set this film up in a big way.

If you like vulgar language, awesome practical effects and a smart and fun story, THEY WILL OUTLIVE US ALL is a must-see.  If you don’t, then you probably are on the wrong blog, but check out the film anyways! 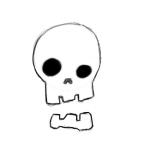 I am a freelance writer, mostly of horror and everything macabre. As a die hard fan of the genre with a particularly deep affinity for Women In Horror, I write film reviews, short stories, screenplays and conduct as many interviews as I can with the fantastic people who make the horror genre my absolute favorite!
View all posts by Justin Hamelin →
This entry was posted in horror, horror films, independent filmmaking, Jessi Gotta, review, Women In Horror and tagged Gotta, horror, horror film review, They Will Outlive Us All. Bookmark the permalink.